The amazing news is, what’s taken nearly 2 years to put on, is officially half gone in 94 days! I’m losing the weight at over 3.5 times the rate I put it on. While I gained an average of just over .15 pounds a day, I’m losing an average of .56 pounds a day. After a few GREAT days of solid workouts, 100% following my diet and really making sure I pay attention to every little detail, I weighed-in this morning at 255.5 pounds for a total loss, so far, of 52.5 pounds which represents 17% of my original body weight. Now THAT is a solid milestone!

As always, you can see the exact details and daily progress at my current weight loss page, but here is the graph from my Fitbit dashboard. Also, this actually puts me about 5.5 pounds from reaching my first major goal!! 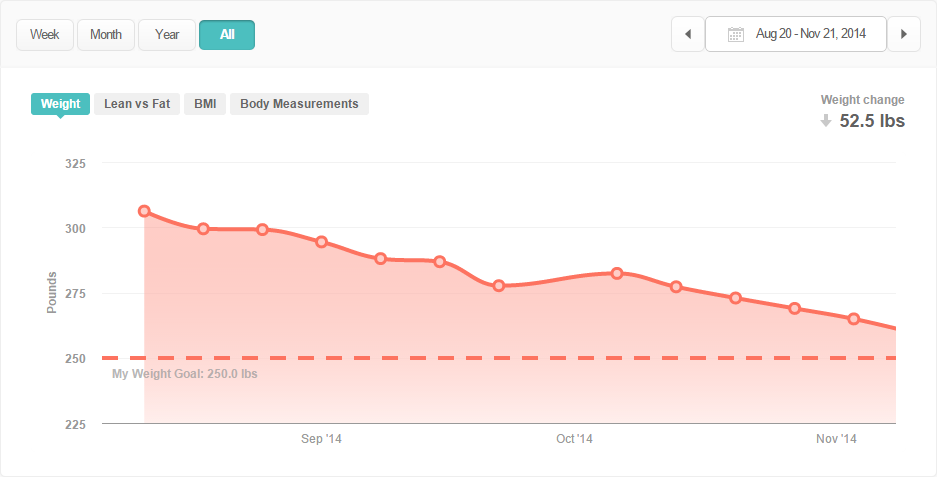 For those of you still reading, you might be wondering why this happened, or even how. The weight GAIN I mean, not the loss… that happened because I’m eating right and running 90+  minutes a day! 😛 The truth is, there are probably a lot of reasons for my weight gain, most of them related to being lazy. I continued my working out and dieting almost exactly 1 month into a relationship, and that’s when I let it all go.

I was comfortable, I had a great girl, we were having tons of fun… my life was in an amazing place. I had just sold my stock in the company I worked with for over 5 years, money was good, the girl was great, life was amazing. So, why keep working right? I had celebrating to do and fun to have!

Well, I decided to change jobs, the season went from the fun summer to the cold winter, stress mounted, physical activity slowed and the fun of drinking with friends, Sunday Fundays, dinners out, vacations and weekend road trips… it all seemed to happen at once and I, unconsciously, decided that having a good time was more important than putting my effort into maintaining my weight. I should have been setting some rules and making sure I stayed in this amazingly happy and personally satisfying place.

Anyone that’s been around me for the past 2 years surely saw the change. They saw the weight pile on, the saw the smile turn to a grumpy scowl. My awesome nights with friends went from hilarious social gatherings to me drinking away the stress and crappy feelings from my jeans not fitting right, the frustration of finding some super cool pair of pants or a shirt and, of course, it not being available in my size. My weight ruined so many of my nights before I even left the house.

When I look back at how I was living 2 years ago and compare it to how I was living and how I felt 94 days ago, I’m scared. I’m sad, disappointed and feel like I let myself down. The worst part is, I let down the people around me who had to watch this happen and worse, who had to endure the brunt of my bad attitude.

The good news is, I’ve said for a long time that the mark of an adult is the ability to make mistakes, correct them and learn from the lesson. Well, this time around, that surely is my plan. Granted I’ve lost half the weight I gained and I’m only a few pounds away from my first goal of getting down to 250/losing 60 pounds. Plus, I’m nearly halfway to “Wonderland” as it’s been called… to be under 200 pounds again, but the most important thing I’ve learned this time around is that a lazy day, a stressful week and even a bad run for a little while, can’t ever result in the type of weight gain I’ve had over the last couple of years. There needs to be rules. If I gain more than 5 pounds, I watch my diet and work out a bit, if it hits 10 pounds, it’s all go, no stop, diet and workout until my legs want to fall off…. just like I do now. I’ve learned the skills I need and own the tools required to lose weight, I just have to make sure I identify the time to really amp things up and keep it all under control.

I said in one of my first posts that “I will win the battle with my weight this time around”, however, I’ve learned over the last 3 months that it’s exactly that… just a battle. The life-long war will be maintaining that weight and level of health by making sure that I conscientiously never allow myself to be in this position again. I let it slip the first time, that was a mistake. To let it ever happen again would be stupidity and that is NOT something I’m willing to accept.