Yup, you guessed it. I’m at it again. This is obviously something that’s been a struggle for me for a long time. This is the 3rd time in the last few years that I’ve decided to try to lose weight, and it’s unfortunately my most difficult starting point yet.

Being overweight isn’t easy. Not only did I have 342 pounds to carry around every day, but there’s the mental and emotional weight that goes along with it. It’s hard to get dressed to go out to see friends and get annoyed when something doesn’t fit right, or fit the “way it used to”. It’s even really hard to go shopping, especially when you have such impeccable style as I do, and everything you pick up and love, you can’t find it your size.

It honestly is a pretty terrible way to start a Friday night, or a terrible way to start thinking about a party or some event you might be going to. Your first thought becomes “oh shit, what am I going to wear”, and it’s a thought that doesn’t go away quickly. Sooner than you expect, it can start to lead to depression and anxiety about going out in general, regardless of the reason.

For someone who’s a bit of an extreme extrovert, like myself, it can really become an internal battle. You want to out and be social more than anything, you thrive on it, but at the same time, the thought of having to actually pick out something to wear and head out there is terrifying at times.

So here is where the journey begins… a few days ago. My first weigh-in this time around scared the hell out of me, 341.2 pounds. That’s the heaviest I’ve ever been. It’s scary that I had to wait until this point to really get my ass in gear again. 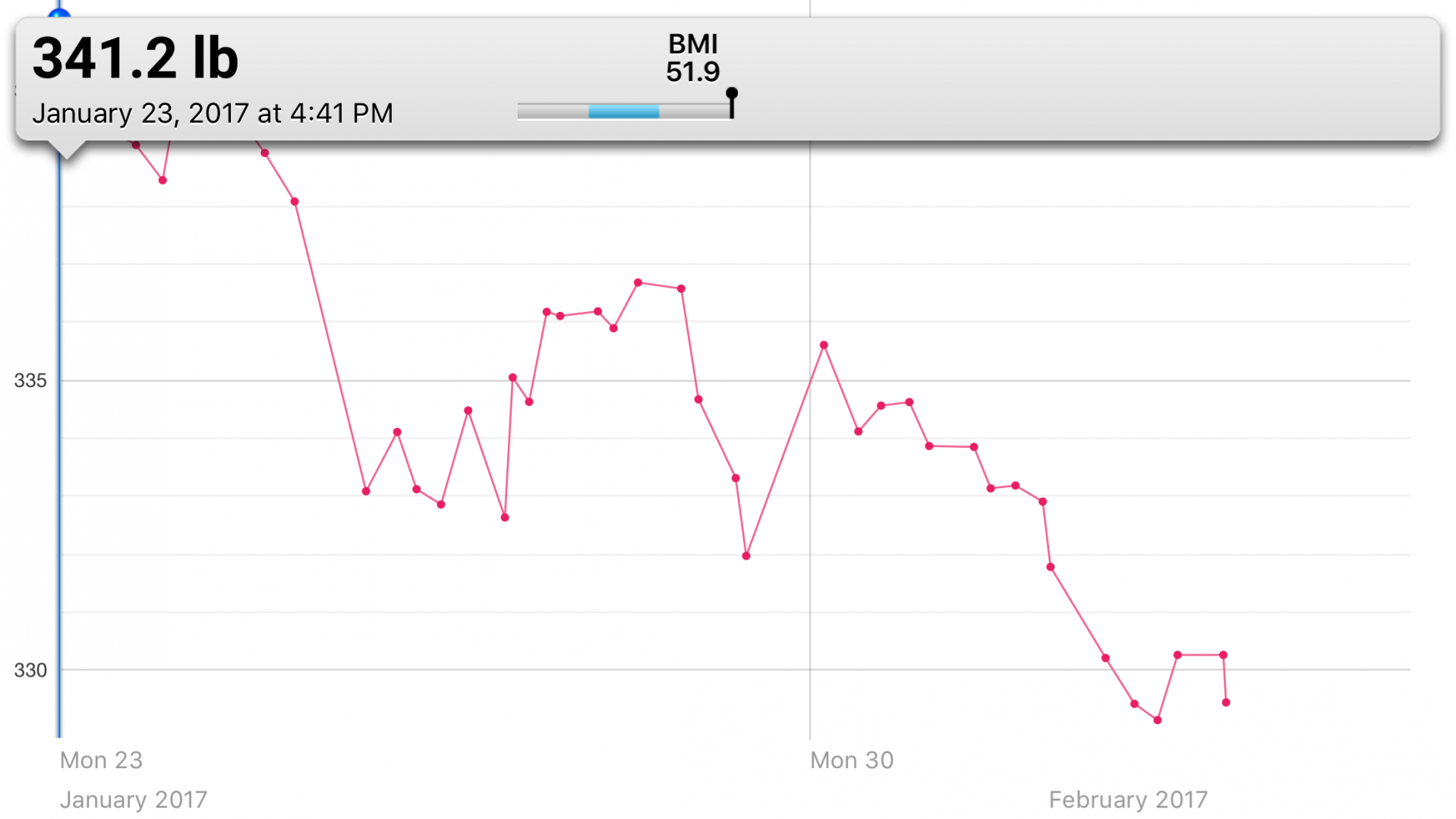 So, as you can see… I’ve been dieting, trying to keep on top of it, and while the graph zigzags all over the place, it surely is going steadily down. I know it’s supposed to be SUCH a bad thing to weigh yourself everyday, or even multiple times a day, but just like you’ve seen in previous posts, I’m a data-driven guy. The more numbers I have the better. So I weigh myself just about any time I walk past my scale and as long as I see the daily average going down, which is it. I’m happy.

And as always, I like to set goals for myself, so this first one is going to be pretty simple. I’d like to get out of the 300 club by the end of March. That shouldn’t be all that difficult. I’ll keep my fingers crossed, keep the pizza out of my mouth and hopefully I can make it!