Well, it’s good to know I’m night lying to myself with the new scale at least. After a solid night of partying, a huge turkey burger and feeeeeew too many beers partying at the O.A.R. show and with the band after…. it could have been worse! Less than a half of a pound gained, I got bumped up to 231.75… and I do LOVE how much easier it is to get an accurate weight on this scale!
After along night and sleeping really late, I did take it a little easier today on the workouts, but still managed to get in 45 minutes of cardio. I think I need a vacation… I need some relaxation time! 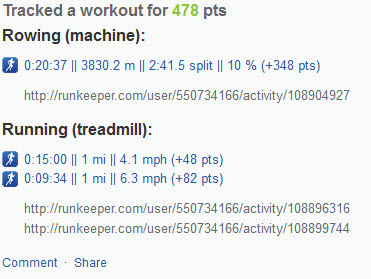 Also, since this was my weekly weigh-in… I do have to look at the total weight lost for the week which wasn’t exactly where I wanted it to be, but at 3.85 pounds, I’m still happy!!